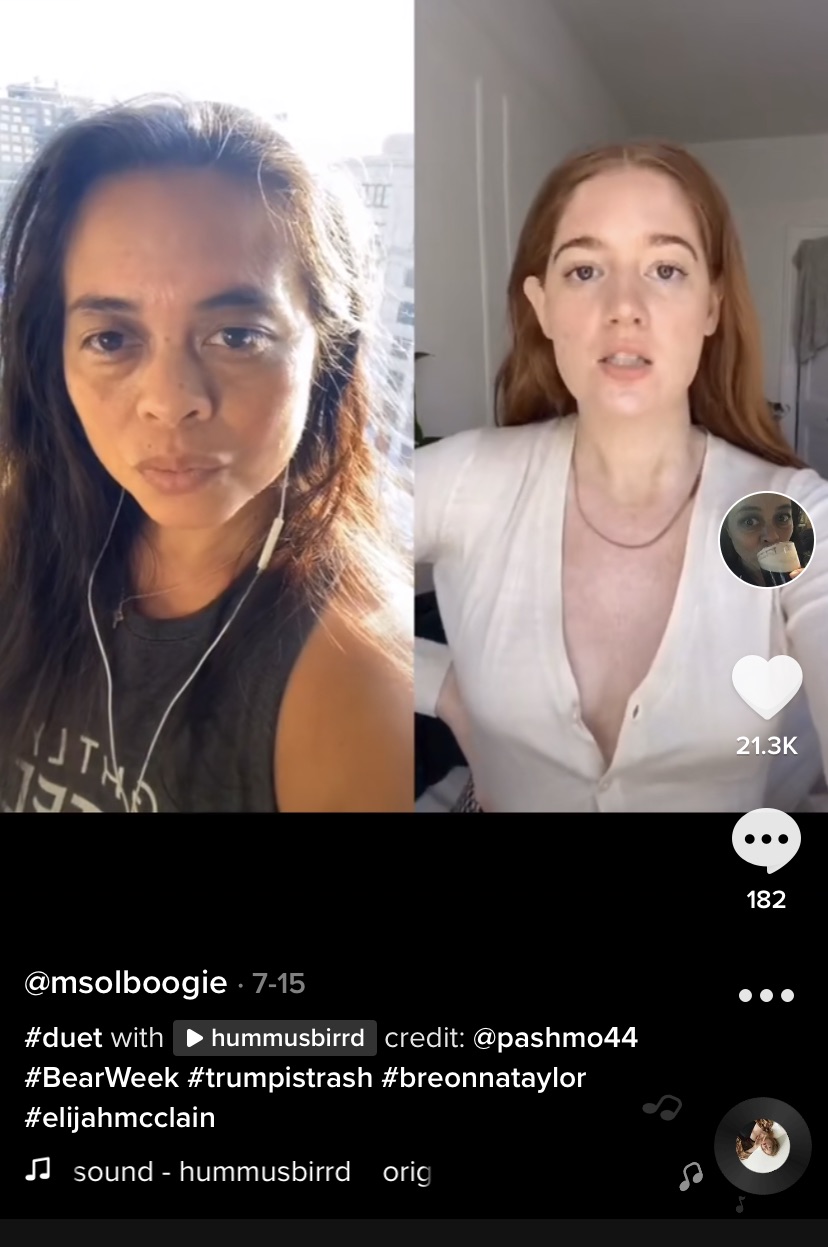 Twice in a fortnight, Trump has threatened to “ban TikTok.” If you were to check my battery usage during this quarantine time (QuarTime), you might see that TikTok is my most used app by a large margin. According to the sad statistics of my phone data, I spend 30-45% of my screen time on this wonderful little app.

What? Seriously? Isn’t that just an app full of teenagers dancing? Yes and no. I’m about to wax poetic about TikTok for a few paragraphs, so if this isn’t for you, keep swiping. (See what I did there?)

The last time I was blogging regularly, I recall the pressure to come up with something interesting to write every day. It gets exacerbated when there are actually people reading your words regularly and, as yet, no one is doing that for this new blog of mine. So, you might think I would feel less unease about “creating content” as we describe all online activity now. But, here I am, staring at a blank Word doc and thinking, “I really should write something today and post it.”

I experienced a similar anxiety recently when a video I posted on TikTok went slightly viral. I say “slightly” because by the standard of current internet virality (viralness?), my one blip of activity is nothing so significant that you might recognize me walking down the street. Like many Gen Xers during quarantine, I found myself invading the domain of the Gen Zers and entered into a very satisfying addiction to TikTok. When I first joined the app (pre COVID), I just scrolled through a bit and kind of wondered why my tween and teen nieces were so obsessed with it. I certainly never posted anything.

And then the algorithm got to know me better and the content became exactly what I wanted to consume at almost every hour of the day. Just like one’s relationship with anything, the more you interact with TikTok, the better it understands you. And, frankly, the Chinese have perfected their data-mining capabilities so keenly that they probably know me better than my own blood relatives.

Finally, one day, I posted something. It was a silly video of my niece’s peekapoo, Bailey, who used to spend every day in my office (when I was still going to an office) while Charlie (my niece) was still attending in-person school (remember those days?). The video received 114 views and 36 likes and that little serotonin boost you get from online affirmation jolted me with a like a tiny bump of cocaine.

Still, I felt a bit silly thinking I belonged to the same world as Charlie D’Amelio and Loren Gray, so I decided in that moment that I would only post videos of Bailey. My rationale to this decision was that I wasn’t really revealing anything personal or being that creative but I could at least feel like I was kinda participating in the community. Plus, if you want to get likes easily, post a cute puppy video. People love puppies.

Then COVID hit and I found myself home alone a lot. During the early days of QuarTime, I did what everyone else did – watched the news nonstop, Zoomed with close friends and relatives, finally started meditating, and reassessed my cooking skills. Eventually, life took on a bit more of a routine, but as someone who used to work seven days a week, I found myself requiring a bit more outside stimulation. So, I did it. I posted a video on TikTok of myself. It was just a silly lipsync video with a filter that gave me blue eyes and retro sunglasses. It was stupid and it got 12 likes and 175 views.

After that, I started posting a bit more regularly. I was bored and I had the time. Also, the community is extremely easy to please and surprisingly supportive if you avoid the dark corners of conservative straight cis male TikTok. Generally, my videos are non-original content and would maybe garner a hundred views and that was fine for me. It’s like paying general admission and still getting a VIP show. I had roughly 40 followers, most of them kids whom I either know personally or others who must have just felt sorry for this obviously single older lady that sometimes has a dog.

And then the world exploded even more. George Floyd was murdered before everyone’s eyes and New York City rocketed into a period of daily protests and conflicts with the NYPD. My timeline changed. The way I engaged with other creators changed.

More creators with interesting voices, typically younger people and people of color, started sharing their activism and political ideas. TikTok became at once a place for entertaining escapism and a genuine source of real time synthesis of current events as well as a platform for engaged and focused debate. I learned where I could find the nearest protest to me and interacted with informed creators from wide backgrounds including historians, professors, politicians, doctors, lawyers, and just every day people who are clearly smarter than I. Because of its reach and accessibility, TikTok enables users to witness immediately thousands of first-hand accounts of what people are actually experiencing as they happen and creating a community of likeminded individuals fighting for similar goals.

And then I joined the fray. A creator called @urfriendlyneighborhoodtransguy made a video that I thought was going to become a trend, so I made a similar video and tagged him as the original creator. I posted it at around 10pm on a Wednesday night and when I went to sleep around midnight, I checked my video and saw that it had about 300 likes – a record for me.

Thursday morning, I woke up and the video had almost 10,000 likes. My tween niece had a dentist appointment that day and I showed her the moment my video ticked over 10K likes. I felt like a star to her for a moment since she and her friends equate metrics with cool factor and, for a moment at least, I was pretty cool. “Let’s duet!” she cheered encouragingly.

Currently, my video has over 68,000 views and 21,000 likes and it keeps getting traction. A few likes every day. Nothing big, but it’s still out there plugging along. My followers went from 40 to 265, which again is nothing, but it was a significant enough leap that I felt a sudden pressure to keep posting. My audience grew. I should give them something.

The problem is, I’m not really a content creator. Again, if you haven’t gotten into TikTok, you wouldn’t really understand, but I’m telling you, the people on this app are freakin’ talented. There are singers, musicians, artists, athletes, clothing designers, and comedians. There are people skilled at saving plants, turning school buses into tiny homes, speaking five or more languages, and rescuing seals from fishing nets. And they all manage to reveal interesting tidbits of themselves doing these fascinating things in 15-60 second increments. It’s perfect for short attention span do-nothings like myself.

Also, as you may have heard, TikTok is the most efficient means for young activists to mobilize their unique brand of snarky skill to do things like ruin presidential rallies. They have great ideas like encouraging younger people to be poll workers on Election Day and then they show each other how easy it is to sign up to do just that. They share insights into each other’s lives and figure out solutions to problems quickly and creatively. You should see what they’re cooking up now. It’s brilliant.

So, now I have the added dual pressures of trying to come up with interesting things to write here and interesting things to do in short videos (assuming Trump’s temper tantrum doesn’t make TikTok go away). And, I’m feeling wildly outpaced by the talent of both the readers and viewers who might stumble upon either of my platforms.

I’ll keep showing up though. At least I don’t have to learn a dance to be here.

iThere are no comments

Begin typing your search above and press return to search. Press Esc to cancel.